My Wife Is a Beautiful CEO - Chapter 273 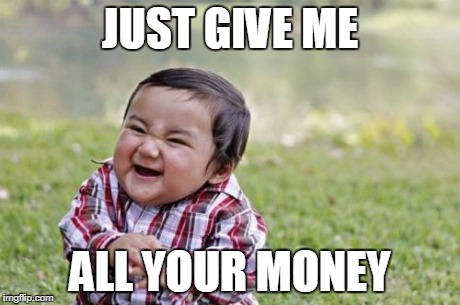 
Such a charity auction was nothing more than a chance for the wealthy to spend huge amounts of money in public.

In this society, you would get looked down upon for being poor. However, once you got rich, you’d get scolded for different reasons. If you were stingy on spending, you’d get scolded. If you were to donate a huge sum of money, people would accuse you of writing empty cheques. Therefore, instead of getting scolded for not donating, it was best to contribute while getting something good in return.

However, Liu family’s charity auction wasn’t something to purely make their name sound. Liu family had their own auction business. In other words, lots of auctioned treasures were authentic, thus making them worth bidding for.

As a result, many wealthy people had certain items in mind that they wanted to get, only then they came to attend the banquet.

Following the guidance of servers, the guests entered the assembly room one after another. Instead of calling it an assembly room, it looked more like a conference hall.

There were tables and chairs arranged nicely in the hall, with fruits and wine in addition to different shapes and sizes of number signs on top of the tables.

Coincidentally, they were sitting behind the married couple Yuan Hewei and Yang Jieyu. When they sat down, Yuan Hewei and his wife turned around to greet them.

Lin Ruoxi didn’t understand why Yang Chen was this close with Yuan Hewei and Yang Jieyu. Although she knew that Yang Chen accompanied Yuan Ye for his birthday, she also knew that the social circles of parents and children were normally different in such a major clan. At least, before the son inherited the position as the master of the family, knowing the son didn’t mean his parents would act friendly towards you.

One way or another, Lin Ruoxi still couldn’t find a reason to why Yang Chen knew Yuan Hewei and Yang Jieyu. Although she was curious, she still didn’t plan to ask Yang Chen.

Yang Chen looked at the surroundings and noticed the Cai sisters sitting on the front row, while some foreign guests attracted Cai Ning’s attention as they sat down on a table behind. They were chatting happily and acted in a very relaxed manner.

Liu family’s auction business was a legit major company. This time, the auctioned items were naturally not ordinary ones. When an auctioneer finally went up the stage, he immediately showed the first item.

On the huge LED screen, there was a three-dimensional rotating blue and white porcelain.

When this item appeared, it attracted an exclamation of amazement. It was evidently rather impressive.

Loudly, the auctioneer introduced, “Ladies and gentlemen, this is our first auctioned item by Liu family. It’s the well-known porcelain collectible called Moutan Peony-Patterned Can. I believe a lot of guests here are antique collectors, I don’t think I need to explain its value. Unlike any ordinary blue and white porcelains, this signifies our Chinese ancient age of changing from the use of ceramic to colored porcelain.

“Such a rare collectible is conserved in a complete package. It’s also provided by our friend from other countries. Its starting price is 5 million yuan, starting now!”

Following the words ‘starting now,’ a lot of people who loved antiques started raising their .

The sound of price calling resounded one after another. Very quickly, the price of the porcelain exceeded 20 million.

Listening to the wealthy people who were shouting their prices like money was nothing but plain paper to them, Yang Chen smiled and asked the silent Lin Ruoxi, “Dear, why are you this quiet? This item has huge potential to its future value.”

“Not interested,” Lin Ruoxi said in a dull manner.

Yang Chen of course knew that this chick had money, she was probably just shy to join in the crowd to shout prices, so she remained silent.

In the blink of an eye, someone shouted a high price of 43 million yuan. This amount was equal to the assets of a couple small businesses combined!

Although this type of porcelain could be as expensive as hundreds of millions, this piece in particular was merely a mid-to-high-grade one, instead of a true representative treasure. As a result, many big bosses regretfully kept their number signs and stopped trying to compete.

The attendance of the guests already signified their position in the society. Hurting the relationship between each other because of a small amount of money wasn’t a good choice.

Before the auctioneer could continue talking, Yuan Hewei who had been silent all the time suddenly raised his sign, saying solemnly, “I’ll pay 50 million.”

After Yuan Hewei spoke, the customer who offered 43 million stopped talking. Instead of saying he lacked funds to compete, it was more appropriate to say that if he dared to snatch something from Yuan clan, he was basically declaring his leave in Zhonghai.

Furthermore, Yuan Hewei didn’t offer 50 million because the item was really worth that much. It was nothing more than his participation in the event, showing everyone the demeanor of the number-one clan by purchasing the first item at a high price.

Unsurprisingly, everyone chose to remain silent. After the auctioneer counted down, Yuan Hewei successfully acquired the first item using 50 million.

After the first round ended, Yuan Hewei turned around to smile at Yang Chen before saying, “I know nothing about antiques. I bet a lot of people are laughing at my foolish act.”

Shaking his head, Yang Chen said, “It’’ be worth 50 million in a few years’ time. Just leave it at home.”

“Oh, do you possibly understand this field?” Yuan Hewei asked out of curiosity.

Lin Ruoxi and Yang Jieyu looked at Yang Chen with doubt as well.

Smiling faintly, Yang Chen said, “I looked into them a little when I was bored abroad. I guess I wasn’t too productive back then.”

He was of course talking nonsense. Yang Chen only knew understood the values of antiques because he had received numerous blue and white porcelains as gifts before. Thus, he knew something about those things. Regarding where they were currently, Yang Chen didn’t care much. Someone must be taking care of them anyway.

“Haha, this isn’t an unproductive act. These are all cultures,” Yuan Hewei said with a smile. “Lots of people here who have developed their businesses to this extent have relied on their senses. Participating in such an auction is only their way of building reputation by throwing money. I bet they’re envious of the so-called ‘unproductive act’.”

As they chatted, the auction continued.

The second and third items got displayed consecutively on the screen.

The ruby jewelry, painting masterpiece from the Middle Ages and ancient Chinese calligraphy scroll, none of them got sold for the price of under 10 million yuan.

However, after purchasing the first item, Yuan Hewei stopped calling prices. Lin Ruoxi remained quiet as usual, like everything was irrelevant to her.

Yang Chen felt rather bored. The games played by the wealthy were rather monotonous. Except getting a temporary excitement for purchasing something, these people who had no idea how to spend their money would only feel empty shortly after.

Putting it another way, it actually wasn’t as exciting as smoking a cheap and strong cigarette.

However, when the fifth item got displayed, Yang Chen suddenly felt a little weird.

A dark-golden wine cup appeared on the screen. It brought the feeling of the Gothic era. It normally contained grape wine.

Looking roughly cylindrical, its opening was rather wide while its foot was round. The wine cup looked really ancient, with some metal scratches and blurry lines engraved. However, it could be seen that it was a mixture of gold, silver and some other precious metals, making it seem like a wine cup used by the noble.

Yang Chen finally understood why Cai Ning came today, and why the few white people had such a weird aura.

Earlier on the internet, what Makedon said was apparently true. Surprisingly, the legendary Holy Grail appeared on this charity auction!

At the same time, Yang Chen felt a slight functuation of cold aura at the back of the hall. It was a surging fluctuation of energy, allowing Yang Chen to immediately recognize the white people’s identities.

“What are you talking about?” Lin Ruoxi asked as she frowned. She thought that Yang Chen was talking to her.

Smiling, Yang Chen said, “My great wife, this cup looks really nice. Drinking grape wine at night can help you fall asleep and aid beautification. Do you want to get it?”

“Buy it yourself if you want it. It’s only two million after all, not very expensive,” Lin Ruoxi said without any expressions.

Yang Chen pouted. He didn’t have that much money.

The auctioneer introduced, “Ladies and gentlemen, this treasure is provided by a seller who requested to remain anonymous. It’s a wine cup used before Christ. The long and mysterious history was the biggest feature of this item. No one was able to tell its name. Today, it starts at the price of two million, but the real value is very difficult to be determined. I hope everyone seize this opportunity—”

Before the auctioneer finished speaking, at the back of the hall, a hot lady with blonde hair and blue eyes dressed in a dark-red gown used very choppy Mandarin to speak, “10 million.”